Mark Knopfler is not only recognized as one of the greatest guitarists of all time, but he is also one of the world's best-selling artists of all time. This fall, he will perform at Keller Auditorium on Friday 13th September 2019 as part of his Down the Road Wherever Tour, in support of his brand new ninth studio album! The international rock and roll icon and former Dire Straights frontman had this to say about the tour:

‘My songs are made to be performed live. I love the whole process of writing them alone and then recording them with the band, but ultimately the best part is playing them to an audience live. I enjoy the whole circus, travelling from town to town and interacting with this group of players is a total pleasure. I’m really looking forward to it.’ 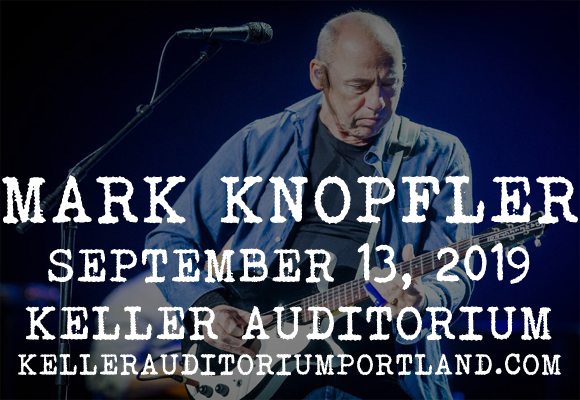 ‘…the wry economy of short stories, while Knopfler’s music stays as unfussily erudite as ever…Thirty years on from Brothers In Arms the man with the gravelly voice, the limpid guitar and the crisp turn of phrase is still writing good songs and terrific lyrics. Mail On Sunday

‘Mark Knopfler at his most personal…can still make the guitar sing without airs and graces.’Drownedinsound

‘…a joy to listen to…His character tales remain as captivating as ever, while his signature electric guitar fills are a significant part of what makes (the) songs…work so well. It is this ability to keep on adding new layers to his already multi-faceted sound that confirms Knopfler’s continuing brilliance.’ MusicOMH