If you are tired of spending your Saturday nights at home, then the illustrious Keller Auditorium has a fantastic alternative. Because on Saturday 30th April 2022 (Rescheduled from Saturday 3rd April 2021), the Obie Award Winning and multi-time Drama Desk Award Winning show, Hamilton, is coming to Portland, Oregon for another incredible performance. Even if you’ve never been to this show before, we know that you’ll find a lot to love! An ever growing list of fans are already naming this the must-see show of the decade, and social media is abuzz with rave reviews since it’s release. Don’t miss out on seeing Hamilton at the Keller Auditorium on Saturday 30th April 2022 (Rescheduled from Saturday 3rd April 2021), because if you love theatre which you will be talking about for years to come, then you owe it to yourself to experience the excitement and thrills first-hand. To order your tickets today, click the Buy Tickets button below.

Ever since its 2015 opening night, Hamilton has delighted audiences with its awesome combination of musical genius, the brave color-conscious choice of using only non-white actors as the founding fathers, and a rich story filled with heart.

This story has won several awards and has found near-unanimous acclaim from critics, fans, and even political rivals who agree that it is top. Lin-Manuel Miranda’s music carries the story, with popular hits including “History Has Its Eyes on You” and “It’s Quiet Uptown”. The set design by David Korins, costume design by Paul Tazewell, and Howell Binkley’s Lighting Design have even been nominated for the 2015 Drama Desk Awards. Hamilton is well on its way to winning its place as on of the top American plays.

Right now, in 2020, Hamilton even goes worldwide with shows set for Toronto and Hamburg to follow up its show in Puerto Rico last year. These brand new showings may even excel the opening box office success, which featured several sold-out showings and a labor day weekend record that was second only to The Lion King in 2015. The show was even the first to break $3 million in box office earnings in only 8 performances.

Everyone loves Hamilton, and now is your chance to experience this phenomenon yourself! So make sure you mark your calendars for Saturday 3rd April 2021 so you can catch Hamilton live at Keller Auditorium in Portland Oregon! 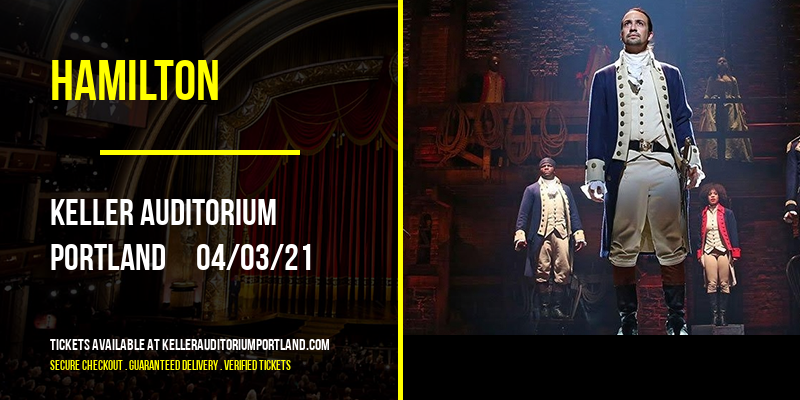